More success for Clane U17 Camogie 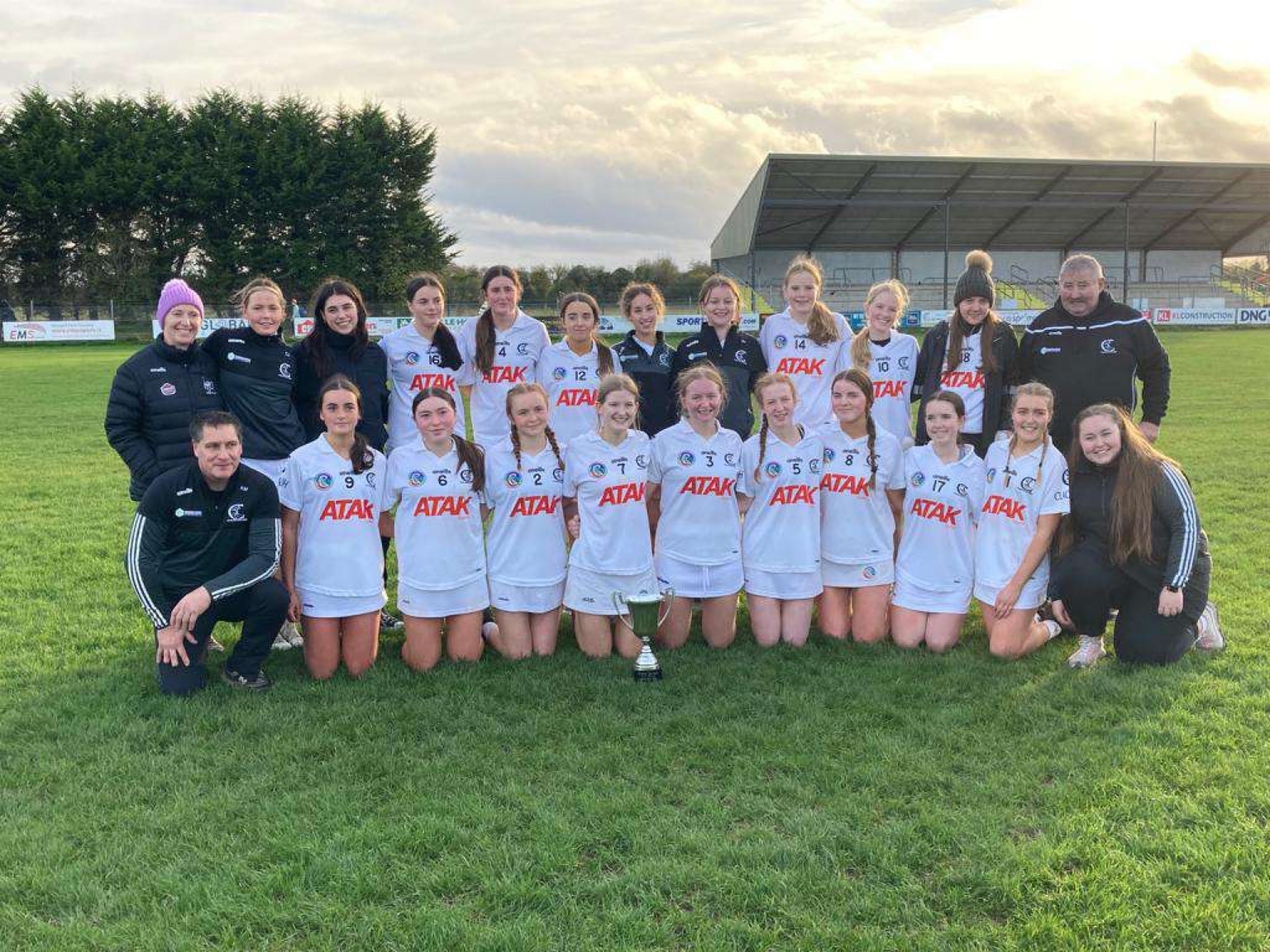 All roads led to the main pitch at Conneff Park on November 6th, where our U17 girls would aim to win the Division 2 championship title. The majority of this team won the Junior B championship 4 weeks previous so they were aiming to end the year on a high note. This group went through the entire competition with a 100% record to ensure they finished top of the group securing an automatic place in the final and home advantage over Ardclough. Confidence was high amongst the group but the girls were aware of the challenge they would face against a strong and physical Ardclough team.

Clane played against a strong wind in the first half but the wind didn’t seem to affect Clane’s Kate O’Dare who opened the scoring early on when she found the back of the Ardclough net. Our Clane girls were on top for a large portion of the first half with points from Kate O’Dare, Anna Doyle, Meabh Maguire and Ciara Doran going unanswered until the 24th minute when Ardclough would find the back of Sarah Powers net for the first time of the day. Ardclough tried to reduce this margin further in the closing minutes of the first half but great defending by Isabelle Farrell, Emma Lynch and Sarah Power in goals ensured they only got 1 more score in the half, their second and last goal of the day.

Mockey and Kevin had a few words for the girls at half time which included "it was time to wake up and to let the ball do the work and stop killing ourselves".

Whatever else the lads said to the girls worked as Clane started the second half just as they had the first when Ciara Doran found the back of the Ardclough net extending our lead to 4 points; our girls would stay ahead for the remainder of the game with great scores from Meabh Maguire, Kate O’Dare, Aoife Mullahy, Anna Doyle

A testament to the the midfield pairing of Meabh Maguire and Caoimhe Maddock along with our half forward line of Aoife Mullahy, Anna Doyle and Ciara Doran who were back in their own back line helping keep the Ardclough girls out of the scoring zone and protecting their goals. Special mention must go Isabelle Farrell who after stepping up to play in the back line for the final had a fantastic game and has most likely secured her place in the backline for next season.

The final whistle couldn’t come fast enough for our girls; the intensity of the game and effort put in by Ardclough pushed our girls all the way to the end. It was great to see Erin Corrigan and Sorcha Lynch back fully fit for the final after picking up injuries early in the campaign. Wishing Laura Edwards and Sarah Killlay a speedy recovery; although they didn’t play a role on the pitch for the final both players contributed greatly throughout the league and championship.

A special mention to the management team of Mockey Lynch, Kevin Mullahy, Barbara Corrigan and Shannon Lynch who have worked tirelessly with the girls all year preparing them for their games. A shout out to physio Barbara Heffernan who helped keep our girls in top form for the duration of the season.

Thanks to Clane GAA for the use of the facilities and to Declan Corrigan for having the pitch in great condition for us, not only yesterday but all year round.

Many thanks to Shannon Lynch for submitting the match report.

Join us for our annual Remembrance Mass this evening - 25...

Donation to St. Brigid's Hospice from the Pat Browne Coff...