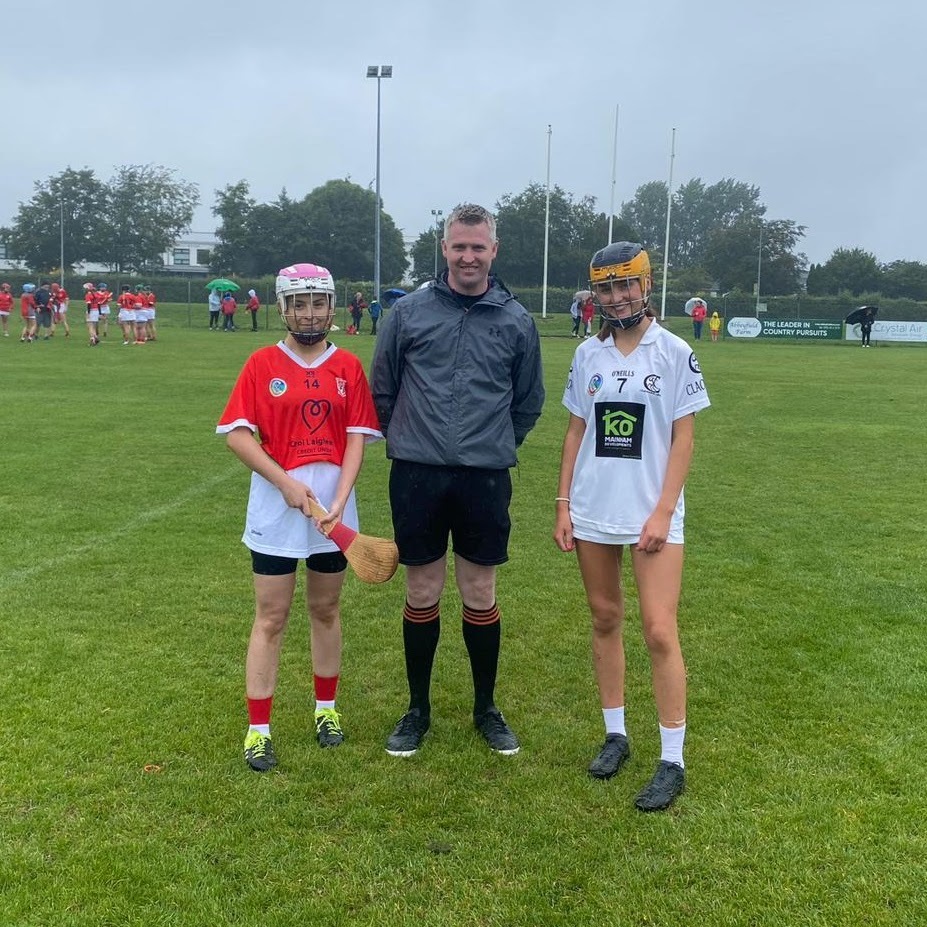 A new era dawned for Clane’s young Camógs on August bank holiday Monday last, when their junior team captured the 2021 Kildare Junior League title in thrilling fashion after a hard-fought win against an extremely spirited Coill Dubh side in Clane. A team made up predominantly of young players who have played the game right though from various young juvenile teams, whilst backboned by a number of seasoned legends who have given many years service to the club, they went through the entire competition with a 100% record winning all their group games to qualify for Mondays final. With a record like that confidence was high amongst the group heading into the final, and this confidence was reflected in the outstanding performance that delivered a much coveted victory.

Monday morning dawned bright and dry, but as the 2.30pm throw-in approached the skies filled with dark rain filled clouds, which eventually burst at approx. 1pm to leave the superbly presented Clane main pitch (thanks Declan “Sox” Corrigan) with a lovely wet zip on the surface. The rain continued to fall gently when the team arrived at 1.45 all ready for battle, and they made their way to the home dugout which was already bedecked in the club colours by team logistics manager Barbara Corrigan. In keeping with her policy of not leaving anything to chance, Barbara had arrived early complete with gear, hand sanitiser and everything else that was required to ensure everything was in place for the girls to perform. Team manager Joe Kennedy also arrived early, so a delegation was waiting for the girls when they landed. A quick team photo was arranged, before the whole panel was put through a thorough stretching and warm up drills session by team coach and fitness guru Chris Bonus. By this time team physio Marisa Kennedy had also arrived to tend to sore limbs and any aches that might be sustained in battle. A large crowd had gathered, with the home support predominantly in the main stand, whilst a boisterous red and white festooned Coill Dubh contingent taking their place behind their team dugout on the road side of the pitch. A rousing team talk was delivered by Joe prior to throw in, before the starting 13 were called to action by referee Ray Kelly.

Despite playing into a slight breeze in the first half Clane started on the front foot. The midfield duo of captain Áine Maguire and Nessa Mooney quickly established a foothold in the centre of the park, allowing the half forward line of Eimear O’Flaherty, Laoise Gilman and Shannon Keane deliver quality ball into the inside pairing of Paula Kelly and Rebecca Lynch. Less than a minute had elapsed before Paula latched onto a ball and fired over the games opening point. This was followed up in the 3rd minute by a pointed free by Shannon Keane, whilst an 8th minute goal from Paula had Clane in dreamland. Any notions that the game was going to be easy were quickly dispelled however, as this proved to be the last scored from the team in the first half. Coill Dubh quickly settled from this moment, taking over for large parts, especially after the water break. It was here that the Clane defence came into their own, with the full back couple of Aoibhinn Healy and Dalison Modilar repelling most of what the Coill Dubh attack could throw at them, whilst behind them Ciara Byrne zealously guarded her goal with a series of smart saves and astute clearances. Further out the pitch the evergreen stalwart Louise Conlon was imperious at centre back, whilst the deadly wing back duo of Aoife Glynn and Claire Lynch thundered into the game, making some searing runs and raking clearances which pushed back the red wave. 2 pointed frees from Coill Dubh left the score 1-2 to 2 pts in favour of Clane when Ray blew his whistle to signal the end of a gripping first half.

Keeping cool heads was the simple message Joe and Chris imparted on the girls at halftime, reminding them of all the good work they had done thus far. A double substitution for the start of the second half was also implemented, which saw Joanne Deay and Derbhla Martin introduced to replenish tired limbs after an energy sapping first half. This gave the team a great boost, as the energy they both displayed was palpable. Joanne drove at the opposition from between the two 45s, whilst Chicago bound Derbhla got on an ocean of ball from midfield. One has to think that Chicago Gaels Camogie must surely fancy their chances in the USA championship next year if they can persuade Derbhla to join them in her Erasmus year, especially based on this performance. Only 4 minutes had elapsed in the second half before Paula resumed her scoring feats with a point from play, whilst a 39th minute goal from Rebecca put Clane firmly in the driving seat. By now the rain had cleared to give way to a sunny evening, with another Paula point in the 49th minute putting Clane 8 clear, whilst a second Rebecca major after 55 minutes finally put the result beyond doubt. This was despite sustained pressure on the Clane rear guard, but they held firm, helped no doubt by the introduction of fresh legs in the shape of Bethan Travers, Laura Casey, and Rebecca Lynch between the sticks. A late point by captain fantastic Aine Maguire sealed the win, with the 2 second half Coill Dubh points a poor reflection on their sustained efforts throughout. The second half also saw the introduction of Niamh Henry, Jenna Cross and Katie Herbert at various stages, with all contributing handsomely. Katie actually sustained a nasty leg injury in the heat of battle which resulted in her having to come off early – this left Clane short one player for the last 5 minutes due to full use of their subs, but the work was done at that stage.

The final whistle heralded scenes of great joy amongst the full panel, who all rushed to embrace one another in the centre of the park. It is worth noting that a number of players didn’t get to have any playing time, but each member roared on their team mates to victory and joined in the on pitch celebrations afterwards. It was also heartening to see injured players like Emma Donlon, Roisín Maguire, Eimear Finn & Ciara Finn attending – no doubt the victory will hasten their recovery in time for championship. It is also worth noting that a number of senior players showed up to support the team on the day, creating a huge sense of family for the club. It would also be remiss not to mention the contribution of another stalwart Ciara Smullen to the victory in the competition. Although she was unable to make the final Ciara performed magnificently to ensure the team made the final with some standout showings in the group matches – especially in the thrilling win over Broadford in June.

Afterwards the extended panel, their families and friends gathered at the club for a few burgers and drinks to mark the victory. Celebrations went on long into the Clane night, as the girls rightly book marked their achievement together in their usual high spirits and great humour. Undoubtedly they will used this as a springboard for future success at all levels at the adult grade. The 2021 Championship is only around the corner!! The hard work that has been put in at youth level is beginning to pay off, and these girls and their senior counterparts are well positioned to drive Clane to the top of the Kildare Camogie tree over the next few years.

As a footnote – the late Pat Browne was mentioned in passing over the drinks on Monday evening. As chairman of the club he would have revelled in the victory, and his passing a few short weeks ago is still keenly felt by all associated with Clane GAA. Clane Camogie dedicates this victory to his memory.

You can find lots of photos from the match, the presentation and the celebratory BBQ on our Facebook - click here.

You can find lots of photos from the match, the presentation and the celebratory BBQ on our Facebook - click here. Congratulations to all. 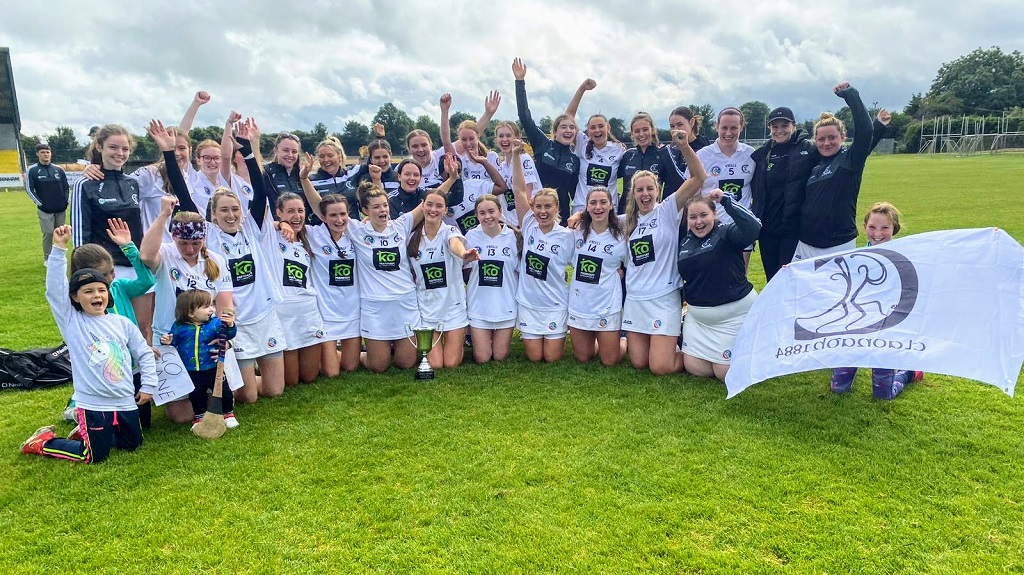 We are now accepting online applications for the Clane GA...

As per the recent eMail/postal communication and in line ...