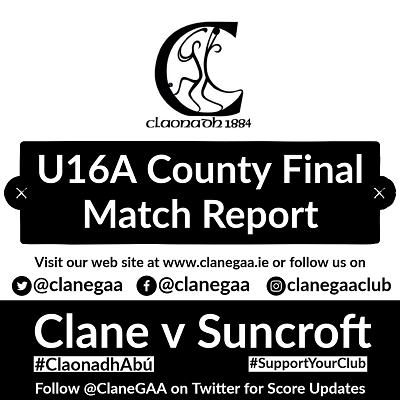 On Sunday last, September 15th in St. Conleths Park, Newbridge our U16 footballers faced Suncroft in the KWETB Kildare U16 A Championship final and with it the chance to complete a famous league and championship double.

Clane had narrowly lost out to the same opposition in an earlier round of the competition which meant a much tougher route to the final (including playing the quarter and semi-finals within the space of 48 hours and they were determined that lighting wouldn't strike twice.

The game started bang on time at 11:45am with a great crowd in attendance to support the lads. Clane won the throw in, settled quickly and were a point up within the opening few minutes of the game . Clane had the better of the opening exchanges and a quick ball to the full forward line resulted in a penalty being awarded to Clane which was duly converted. Suncroft responded well and got the next two scores; one from a free and another from play . Clane then scored the next score with a free and from the resulting kick out Clane pieced together the move of the game which ended in a superb team goal. Suncroft lifted their game and out scored Clane by six points to two leaving the half time score as Clane 2-04 Suncroft 0-07.

Clane started the second half as smartly as they did the first half with a quick point, their third goal and another point soon followed before Suncroft got their opening score of the second half . The Clane backs excelled in the second half under very difficult weather conditions and only conceded one more score for the remainder of the game .

Clane dominated the last ten minutes of the game scoring six magnificent points in the wet difficult conditions to see out the match.

Congratulations to a team of fine young men and a quality management group of Ger Fanning, John O'Doherty, Tony Tighe and John Ball. 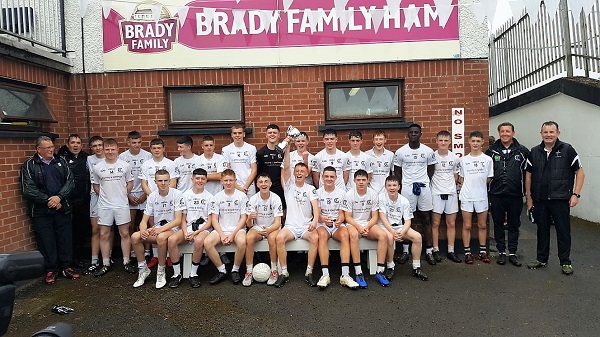